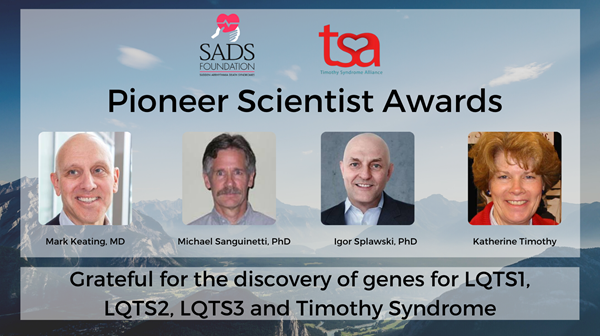 In 1985, Katherine W. Timothy was hired by Dr. G. Michael Vincent to genealogically research a large diagnosed LQT Utah family. After Timothy expanded the family to 4-5,000 individuals, over 150 family members were identified to be affected with the LQT disorder. With this phenotypically described pedigree in hand, Vincent and Timothy went to see Dr. Raymond L. White, head of the new Institute of Human Genetics at the University of Utah, to see if he and his group would be interested in searching for the gene causing this little-known cardiac disorder.

After evaluating and accepting this large pedigree for genetic research, White went searching for an individual to head the LQT project and found a young John Hopkins Medical School trained cardiologist, Dr. Mark T. Keating, who was doing post doc  genetic research in the Dr. Lewis T. “Rusty” Williams laboratory at the University of California at San Francisco. Keating established his laboratory and began the LQT research in the fall of 1989. Timothy was loaned to Keating to expedite the research and together they began the genomic screening, Keating making the Southern blots, Timothy helping in the RFLP analysis. Months of genomic probing went by and in the late fall of 1990, the location of the disorder was mapped very close to the Harvey RAS 1 gene on chromosome 11, the findings were published in 1991 in Science.

Dr. Michael C. Sanguinetti, a post doc from the University of Rochester in biophysics, was studying cardiac ion currents of IKr and IKs in the pharmaceutical industry. He was looking for an environment more conducive to his naturalist nature and accepted a professorship position at the University of Utah in 1992. Sanguinetti and Keating began a friendship and a successful working partnership in the discovery of h-ERG (KCNH2), SCN5A, KvLQT1 (KCNQ1), and min-K (KCNE1), with Sanguinetti’s extensive knowledge and expertise in performing functional cell studies on ion channel currents. His studies proved the abnormal ion current function in the families affected by the identified genes causing LQT and unexplained sudden death.

In 1993, a young graduate student from Sofia University, Sofia, Bulgaria, began working in the Keating laboratory, Igor Splawski. He was expert in sequencing genetic codes and determining location and genetic structures of genes, and was working to identify the sequence of the original genetic find on chromosome 11, inasmuch as this gene’s mapped location was discovered to be near the Harvey RAS 1 gene, but the complete genetic nucleotide sequence of the area was uncharted at the time. Over time Splawski identified the beginning, ending and interior sequences of this new gene by positional cloning. These findings were published in 1996 and was named as KvLQT1, later renamed KCNQ1. This newly identified KCNQ1 gene was now known to be responsible for the original large pedigreed LQT family wherein the genetic studies had begun six years previous, and became referred to as LQT1.

Over the years of genetic research, the Keating laboratory received referred LQT families from the US and around the world. Included in their extensive LQT database was a small subset of individuals who were identified at birth as having exceptionally prolonged QTcs, cardiac arrhythmias and with these serious cardiac findings, infants always presented with syndactyly or conjoined fingers and toes. Splawski had included this subset in all of his many previous screening experiments, but no gene discovery associated with this LQT disorder. Timothy traveled to these LQT associated with syndactyly families to give ECGs and expand family pedigrees in the hope of understanding how this particular disorder was inherited, however, nothing was identified, as all family members appeared normal. After multiple (24) candidate gene screenings, a second screening was undertaken of the L-type calcium gene, CACNA1C, as alternative splicing of exons had recently been discovered. After almost 20 years of searching, on September 12th, 2003, Splawski discovered that each of the children in this group carried the exact same CACNA1C variant, unseen in any of their parents, suggesting this was a de novo change in the children. When CACNA1C was discovered to be the affected gene, and expression studies had shown this gene expresses in almost every tissue of the body, including the brain, Timothy was asked to evaluate the living children for developmental/neurological/behavioral dysfunction, as previous communications with parents suggested this might be observed. Proof of neuronal involvement was obtained and the 2004 Cell paper written regarding this genetic change became the first scientific paper implicating a gene for autism. He identified disorder was named Timothy Syndrome.