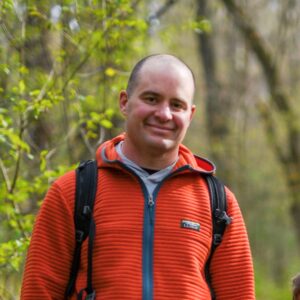 Can you tell me a little bit about your journey?

I didn’t run at all growing up. It’s just something I developed an interest for later in life. I accomplished completing both half and full marathons plus I completed one ultra marathon. I was really getting into running and enjoying different types of races. I became more aware of my ARVC journey a few months before May of 2020 while I was out for a run. I was just out for a normal 5k lunch run. When I came back from my run I noticed that my heart rate would not settle down. I was an EMT throughout college and was currently working at the local fire department. So I’m pretty well versed in knowing when something is not right. I had noticed that it was probably an arrhythmia. Looking back I was most likely in V-Tach for the first time. Luckily, when I’m in V-Tach, (knock on wood), I can walk, talk and participate in normal activities. In fact, during this run, I originally had symptoms like a mile and a half in. In the end, I walked a mile and a half home, showered and laid on the couch and it went away.

I decided to take a break from running for a while and then in May later got back into running. Shortly after I got back into my training it happened again. This time, I was in V-Tach for almost two and a half hours. I visited a friend at the local ambulance station and she put me on the monitor to see what was going on. Her response: “you need to go to the hospital right now, this is really, really bad. I shouldn’t even let you go by personal vehicle.” Happy Mother’s Day weekend to my wife who drove me to the closest appropriate facility.

I walked into the emergency room and I said, I’m in V-Tach. The nurse put the pulse oximeter on me and it’s showing about 200 beats per minute. She couldn’t believe it. They took me back and as soon as they put me on the monitor, my heart reset itself. So I didn’t have to undergo a cardioversion or anything this time. The nurse notified the doctors of what she saw but when they came back in I was already back to normal sinus rhythm. So I spent a couple of nights in the hospital undergoing an assortment of tests. They were sure it was due to blockage or something but the catheterization came back clear. I’ll never forget the ER cardiologist saying “your heart is very clean, I’d trade with you right now.”  Upon discharge I was referred to an electrophysiologist who’s been great to work with. He had me pretty much pinpointed from our first meeting within like 15-20 minutes. He said “I’m not 100% sure, so we’ll run a whole bunch of tests but I would say that this is a pretty classic ARVC diagnosis but we’ll make sure of it.”

During my initial meeting with the electrophysiologist, I pushed for a cardiac stress test, which I understand is not always recommended anymore. I wanted to know more about my limitations and triggers. And frankly, I just wanted to run again (in a safe environment) because it had been so long. So I went on the treadmill and there was no V-Tach at my max heart rate. I asked if I could keep going to see how far I could go. It becomes extremely challenging in a short period of time so I ended up quitting not long after my max calculated heart rate. They allowed me to walk for just a moment to cool down and the doctor wanted me to sit down. As soon as I sat down, I went into the V-Tach which wasn’t a big deal to me (remember I can function pretty normally). The nurses didn’t seem to agree. They said it was time to have a cardioversion and luckily, there was an anesthesiologist available, unfortunately after that I had to wear the dreaded LifeVest for a week until my ICD placement, but it beat staying in the hospital until I could get my ICD placement scheduled.

Other tests I had done around the same time included MRI, Echo, genetic testing and ECG. I’m thankful for meeting all of the criteria and having one of the identifying genes (PKP2). I finally had my answer. I have ARVC. I had my first ablation and ICD installed around July of 2020 at the age of 38.

After the ablation and ICD, I started to try to live my life as normal as I could. I started doing things I would have done before diagnosis. I could feel something wasn’t right on long walks in the woods, and other physical exertion mostly sudden bouts of nausea, later I learned that this was the device pacing me out of short bouts of V-Tach. In about September of 2020, I had my first shock and that’s when I started over with learning how to be the new me. Then in December of 2020, I was showing my wife how to use the snow blower and not even exerting myself that much, I felt myself going into the V-Tach and received a series of three shocks. I asked my friend to drive me to the hospital, who’s an EMT as well. As soon as I checked in to the local hospital emergency room,  they immediately asked which hospital would you like to be transferred to? They didn’t know what to do with me. I was transferred to the hospital that did my first surgery (ICD placement and ablation) where I spent the next week waiting for my 2nd ablation surgery.  During this whole adventure, this is all still happening with COVID regulations and my wife was not allowed to be at the hospital with me. However, I am grateful for the staff that helped me make it home on Christmas Eve so that I could be with my wife and son. It’s been a challenging and wild ride. Currently, I have had no arrhythmias at all since my last ablation and I feel that I am in a really good place.

How has your ICD impacted your life?

I would say at first I was terrified because I didn’t know what it was going to feel like and the first shock hurt a lot, obviously. I think that’s common. It takes a while to get used to. After I had that series of three before Christmas of 2020, I became more aware of how the device operated and when it’s going to try to pace me and how it shocks me.  I’m very thankful and have liked my device choice which my electrophysiologist helped me choose. I am also strangely thankful for the summer and fall of 2020 where I learned many of the device settings in real time, from pacing to shocks. I still think about it daily.  For example, right now I have a cough and I’m worried about pulling a lead or doing something silly like that but for the most part, I barely notice it.

First thing is to follow SADS on social media and participate as much as you are comfortable. The Facebook groups for each condition are very helpful, it connects you with people going through the same or similar things as you. There’s a lot of ways to communicate with others. When someone first gets diagnosed, they instantly jump on there and latch on to a group that fits their lifestyle or whatever answer they’re looking for. I go through every day without worrying now, as far as the diagnosis, it’s not the end of the world. It’s just the end of the world as you knew it. It’s definitely going to change. That’s just something that’s going to happen no matter what, with any major diagnosis. You look at things from a new perspective. It’s both good and bad. I don’t wish it upon anyone, but at the same time, I definitely live my life differently now.

How has the SADS Foundation been helpful to you?

Lots of ways. I’ve attended a half a dozen or more seminars from Dr. Ackerman and some of the other doctors that he’s brought on for ARVC focus. I especially enjoyed ones with genetic therapy and the future care for ARVC patients because of the SADS Foundation. SADS has helped me to connect with research groups as well. I’ve also picked up books from people that have been interviewed through the organization. It’s a great group of people. I’m very thankful that it was available to me.