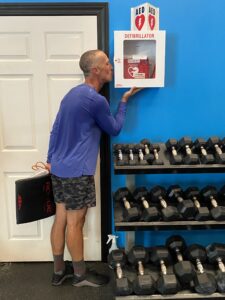 Can you tell me a little bit about your SADS journey – from diagnosis to where you are today?

It started when I had what they call Sudden Cardiac Death at a CrossFit gym. I was doing a workout with my 16 year old son, which sucked to have him witness.

I remember everything. I remember going down. I remember waking up with nothing in between, like somebody turned the lights out and turned them back on. I was out. I had no pulse for eight and a half minutes. About four of those minutes were just trying to get me to come to, they thought I was too hot and put ice on me. They had an AED there. So they put that on. It monitored my heart for a minute and detected no rhythm. So they did compressions and got a rhythm.

It said initiate shock, they shocked me but it didn’t work and there was an audible flat line. These steps continue for a couple of minutes while CPR is being performed. And a second shock was initiated

Finally, I came to and I was like, well, are we going to finish the workout? I had no idea what just happened. I thought I was hung over, which is critical to another piece in the story. I thought that I had gone out drinking the night before because I couldn’t piece the night together. I had this horrible taste in my mouth that I would equate to a hangover. I looked at the coach and said, Man, I’m so sorry. I guess I got drunk last night and I fainted during the workout. He looked at me. He said no, I don’t think that’s it. The paramedics came in and asked me all these questions and were dismissive and just so belittling. They started questioning me about what I did the night before and if it included drugs. I thought I was fine but everybody convinced me to get in the ambulance and go get checked out.

In the ambulance I asked about my son because he was there doing the workout with me and I didn’t know what happened to him.

At one point the AED registered like 386 beats a minute and I was in Ventricular Tachycardia. When that happens you can actually feel the rhythm. So as this all started, I’m standing there just waiting for it to go away. I needed to take a knee. I was hoping it’d go away but it wasn’t so I took two knees. The guy next to me put his hand on my shoulder and asked if I was okay.

At first I didn’t want anybody to know what was happening and didn’t want him touching me because I thought somebody was going to see that something’s wrong. And then all of a sudden, it just got worse. I had to lay down and all I could think was – please don’t take your hand off my shoulder. It was horrible.

As I laid down, I saw my son’s shoes. It was a partner workout. I was his partner. So he knew something was up. And that was the last thing I remembered.

I just ran an ultramarathon the week before. It was a 50k and overnight. And I came in second place. I’m a fit guy. I’m in good shape.

When I was in the hospital, they kept doing MRIs and focusing on my right ventricle. They told me it was a little bit enlarged. And I told them that I had just done an endurance race the week before this. They figured that’s what it had to be from. They ran tests to rule out a heart attack as well. There was no damage, the results were normal and I had no troponin in my bloodwork.

Monday morning, they came in and then they started asking me about drug use. I don’t use pre-workout and definitely don’t do drugs. So they kept digging deeper. And they said, “Well, there’s no explanation, you know, are you sure you don’t do drugs?”  Yeah, I’m pretty sure.

We did another MRI, and that was on Monday afternoon. They finally came to the conclusion that it had to be ARVC.  They wanted to do the genetic testing but already knew what it was going to say. The doctor began telling me that running and working out was no longer an option for me and that I could take up yoga and golf. It was terrible.

They said the next step was to get an ICD to help keep me alive. Then we’ll start making a plan to help you live a “normal life”. It was all so very fast. I got the implant on June 15,  2021.

About a month later, I was at the gym on July 9, because to be completely honest, I didn’t believe I had anything wrong with me. I had gotten my genetic panel back, and it showed that I did not have the gene. I didn’t have a Long QT in my sequence, or an abnormally dilated RV, but I did have ventricular tachycardia which goes along with the SCD piece. I went back to working out thinking it was just a fluke. I’m with my son again and we’re doing a workout and it happens again. And I felt the rhythm and all. I had that same taste in my mouth. That is what death tastes like. It’s where all the blood drains out of your head because your heart stops pumping blood.

So that’s when everything became very real to me. Death became very real! It happens. It doesn’t ask for an invitation. It doesn’t call ahead. This is when I really realized that I did have a condition. I haven’t had an episode since and I’ve continued to do my CrossFit workouts and have had some stuff report on my ICD.

We put our kids through genetic testing as well. My 17 year old is like a fierce CrossFit competitor and a wrestler at the time. So I had all this PTSD, I couldn’t go to his meets. I was worried about it happening there while I was cheering my kids on. I’ve gotten better and you find your groove. Find different things and you’ll begin to realize there’s life after diagnosis.

Time is your friend. And you’ve got to give yourself grace and know that life is not over. But parts of it might have left you. Give yourself plenty of time, grace and patience you are going to be fine. That’s the hardest part. For the athletes, I’ll suggest you try locking your ego down in the basement and just move on.

How has the SADS Foundation been helpful for you and your family?

It has been super beneficial. I have been in some of the chat rooms and met with the others in the ARVC Club. It was literally a lifesaver. There were some dark days.