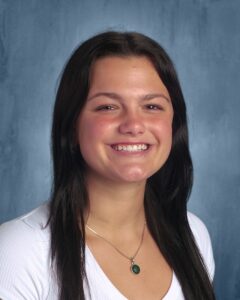 My oldest daughter Madeline and I are both affected by ARVC. We’re a very active family and have always been involved in sports. Maddie was in soccer, basketball, gymnastics and dance. Very competitive, very driven. She especially had a real skill for soccer.

One day she went from soccer to basketball. The coach called and said Maddie is on the ground and says she feels like she’s going to pass out.  She already had anxiety, and was always stressed about her health, ironically. My husband decided to take her to the ER with hopes of her hearing she was “OK”.  Everything checked out. A little bit of an erratic heartbeat but nothing to really worry about. They said just follow up with your pediatrician.

She was a starter, played the entire game and never taken out. Then one day there was one game where I noticed she was taken out.  Afterwards, I asked her why she was taken out. She said, I asked Coach to take me out, I felt like I was gonna pass out. And if you didn’t know better, you would think she was out of shape. Except that she was in tip top shape always playing sports.

I did the recommended follow up with our pediatrician. I explained the situation, and just wanted to make sure she’s okay. It’s probably nothing. That phrase still haunts my brain. The pediatrician thought maybe it was POTS syndrome, especially since we all have low blood pressure. She suggested having her checked out by cardiology, just for kicks.

The cardiologist was not thrilled with her symptoms and had her do a stress test on the treadmill. She was supposed to be going back to back practices that night. He basically looked at her, looked at me and said, I would not go to practice tonight. They did the EKG and he said, I think I know what it is. I would like to do an MRI and genetic testing.

When the doctor called with the results he said it’s ARVC. She needs to stop all competitive sports. Telling her was the hardest conversation I’ve ever had. She wasn’t just the kid that played for fun. Maddie had even traveled to many different states playing soccer competitively and even played on her soccer club’s national team at the Gothia Cup in Sweden. She was in eighth grade with big dreams and a big future with soccer.

When we started the genetic testing I began to think it came from my husband who had a stressful job and history of AFib years ago. I was surprised to be the one to test positive. I’ve been exercising my whole life running races, and doing everything in between. I’ve never had any type of problems. My other two children tested negative. We met with a genetic counselor. They helped us go through this entire family tree. Multiple extended family members also tested positive. They acknowledged what a difficult diagnosis it was but we’re so grateful towards Maddie! With her being diagnosed, she potentially may have saved lives.

We met with another doctor at Boston Children’s and they said, We have a few options. We can just monitor you or we can do an ICD. Maddie insisted on the ICD so she could just get on with her life. She ended up with an ICD/pacemaker. The meds were to be the primary source of therapy and having this ICD is just a backup.

My big takeaway from this whole experience is what sports did for Maddie and a lot of other kids. So I took it upon myself. I had called the local gym and I set her up with a trainer, and got her an Apple Watch. I did research and I got her set up with a counselor, a therapist, and got her into golf. I was doing all of these things for her to feel normal again.

What advice would you give to someone who was newly diagnosed with ARVC?

Do your due diligence, reach out to friends and family who will listen. Do your research, ask questions, contact the doctors. I did a lot of my own research that I wish was readily available for me. Be your own advocate and address your mental health as well.

How has the SADS Foundation been helpful to you and your family?

I’ve watched some of the virtual conferences. One of my siblings who’s also positive found them very interesting. Especially the one that was based on younger kids. I would love to get more involved in these conferences, and I hope Maddie can attend one in person.