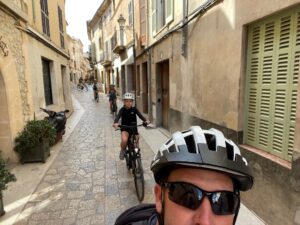 In 2001, Mike’s sister, Jackie, passed away at the age of 31 from undiagnosed ARVC. Mike, his brother, and Jackie’s husband, Adam, formed a support network for affected individuals and their families. Adam is cycling across Canada to raise awareness of ARVC, connect with other families, and raise funds to help support research.

Can you tell me little bit about your ARVC journey – from your diagnosis to where you are today?

My diagnosis happened after my nephew Greg’s heart stopped. That was the first time anyone knew there was a genetic reason behind my sister Jackie’s passing in 2001. Once we had that connection, and Greg had a diagnosis of ARVC, we started testing the family tree. At that time, I was living in Guatemala, where I had a cardiologist with a little bit of knowledge about ARVC. I had a 4D scan and then got testing back in Toronto, where they told me that there was damage around my heart, and that I needed an ICD as soon as possible. I was in denial and disbelief – I had played high-level sports for years and never had any of the symptoms.

I had an appointment in February of 2020 to meet with the surgeon, and my ICD was placed right before COVID hit. After that, I learned to manage my lifestyle and cope with my beta blockers. What I’ve found through being a part of the ARVC Family Support Ride Across Canada with my brother and Jackie’s husband, Adam, is that the fundraising is great, but connecting to other people with similar stories is the most meaningful thing. Knowing you’re not alone is so crucial. It’s a rare disease, but the more we learn and the more people are diagnosed, the less rare it is.

What has been the biggest challenge you’ve faced living with ARVC?

I played a lot of high-impact and physical sports, and that’s what made me feel good. I did it for years, and then with this diagnosis, was told I had to stop. That adjustment has been very difficult. I’ll start hiking up a hill and find myself breathing heavily because of beta blockers. That’s really impacted me – I don’t like it and it’s something I never experienced before. I coach soccer now, but I can’t play it.

What encouragement or advice would you give someone who has just been diagnosed with ARVC?

You’re not alone, and if you get a diagnosis, that’s good news because you can manage it. I did go through a phase of wishing I hadn’t known about it, because I thought that probably nothing would have happened to me. But knowledge is power, and once you know, you can get proper treatment – and your likelihood of a fatal event goes down. I’m also a dad, and my kids are positive for ARVC. I’ve worked hard not to make ARVC a focal point in their lives – I just treat it as something that needs to be managed.

What would you like other people to know about ARVC?

Just the basics – because once you know, you can recognize symptoms and look out for it. Until you know about it, you don’t know it’s a possibility, and if we do our job right getting education out, that changes. Knowing is half the battle. I don’t want to scare people – the goal is just to know that there’s easy ways to tell if you have it or have a genetic predisposition.

Learn more about the SADS Foundation’s resources for families with ARVC here.