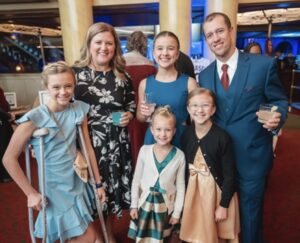 Can you tell me about your family’s SADS journey, from diagnosis to where you are today?

When I was 30 years old, I had a Sudden Cardiac Arrest. I had no prior knowledge that I had a heart condition. I was six weeks postpartum at the time from my fourth child, and my SCA happened in bed – my husband did CPR, both my husband and my 5-year-old child called 911, and the first responders brought an AED.

I was misdiagnosed for six years prior to my SCA. During my pregnancy with my second child, I could feel my heart pumping hard. I mentioned it to the OB-GYN, and I was put on a 30-day event monitor. Afterwards, the cardiologist told me that extra fluid was causing my heart to beat hard. So although I had the same symptoms during my third and fourth pregnancies, I didn’t bring it up, because I assumed it was the same issue. After my SCA, I found out that I had Long QT Syndrome – and the interval could be seen on EKGs the whole time.

I was in the hospital for five days. The cardiologist who’d seen me six years prior diagnosed me with LQTS. I remember him walking into the room and apologizing for misdiagnosing me. I had to have an ICD implanted. Since then, all four of my daughters have been genetically tested and two of them have LQTS also – the classic 50/50 chance of inheriting it. Both are doing really well, are on beta blockers and have medical ID bracelets. They live pretty normal lives – we’re a little more cautious than we would be otherwise, but it doesn’t hold them back.

Why do you support the SADS Foundation, and why is it important to you?

The SADS Foundation has been super important to us. It was the first place I could get answers and relate to others with the same condition. And they’re my go-to for the school year – we use their forms and information for teachers every year. It’s a place where I can relate to others and help spread awareness about these conditions.

What advice or tips would you give to someone running a Facebook Fundraiser?

I’ve done a few Facebook Fundraisers for SADS, and I always try to put some of our story in it. Sometimes I do them in February for National Heart Month, because my older daughter who has LQTS also has a birthday in February. I also try to make all my fundraisers educational – so people realize that knowing CPR with an AED is so important.

I invite friends to my fundraisers, but I don’t try too push it too much either. I’ll repost it in ways to educate others. So many people who donate don’t know anything about SADS and learn something – or feel touched by the story and want to help out.

What do you want others to know about SADS conditions?

Don’t ignore symptoms! If you think something’s not right with your health, or your child’s health, dig deeper. Speak out – you know your body better than anyone else. Looking back, I had signs, but never knew it. They checked for other things, but never the heart. It’s terrifying to think that as a high school athlete I could have had an event. If you can go 30 years without a diagnosis – and my mom actually went 50 – it can sneak up on you. And if someone collapses – including a child – don’t hesitate to jump into action. Time is everything with Sudden Cardiac Arrest.

We often think of physical issues with the heart, but not electrical. Even in the medical field, not enough doctors know about it.