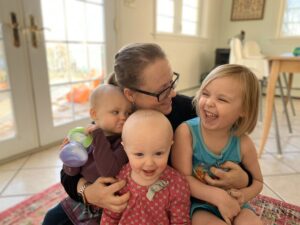 Allison and her children

I was diagnosed with Long QT Type 1 in 2018, following the birth of my twin daughters. About a week postpartum, I had a seizure at home. They think it was due to postpartum preeclampsia, which is pretty rare. In the ICU, they ran a bunch of testing. They saw that I had prolonged QT on the EKGs. And they thought, Oh, it was just part of the stress and nothing to be concerned about.

They sent me to outpatient cardiology and did another EKG and they said, “it’s still quite long, you probably have a genetic form of Long QT Syndrome.” And so that started this snowball effect of getting genetic testing. And sure enough, I came back positive.

My oldest daughter, born in 2014, tested first and she came back positive. One of my two twins came back positive. And then had both of my parents do a genetic test. It was from my father’s side so he had his siblings tested, and multiple cousins. It was just this big trickle down effect. It’s amazing that we’ve all lived for many years not knowing about this and kind of having this danger lurking within us without really being aware of it.

I always say that I was really thankful that I had postpartum preeclampsia and had a seizure because a lot of times families catch it because of someone dying. And for us, we caught it in a different way.

Has the SADS Foundation been helpful to you? If so, how?

Incredibly helpful. I was particularly scared for my four year old and one of my newborn twins. I ended up connecting through a Facebook group for Long QT syndrome and SADS was mentioned. There were lots of people part of SADS as volunteers posting really good information.

SADS really helped when my daughter went into kindergarten. I printed out a packet with information for the school and that helped us really advocate for making sure that everyone was trained in CPR and having an AED close by.

It also helped me find my voice, to find the verbiage to talk about something that was new and scary, but also gave reassurance that there are so many of us out there having the same experience. So finding that community and being able to connect with other people going through similar things, helped with my anxiety for myself, but in particular for my children.

First, it would be to take a deep breath, try to stay away from Google and find the community.

Reach out and find a support group either online or different resources, like the Facebook group that I joined.

One of the most helpful things for me is to hear from other people, know that they’re okay, and that they’re able to navigate this. It doesn’t have to mean our life is over having this condition. In fact, most people live a normal, happy, healthy life. Take a deep breath. Don’t go to Google. Find your people.

How has the diagnosis affected you?

That first year was really about recalibrating and trying to make sense of who I am now that I have this diagnosis. What does it mean to be a mom to two kiddos who have this too? I was on medication, I struggled a little bit with the beta blockers, which I think is kind of normal for someone older starting them.

Is there anything else you would like others to know?

The message of when you’re first diagnosed; it’s okay to be scared and nervous and unsure of what your life might look like following diagnosis. But time really is powerful, it really helps.

The distance between an event or a diagnosis can really lead to living our life the way that we had before. It’s not an interruption, not the end of something, and knowing is better than not knowing because then you can treat it and do the things that you need to do to make sure that you don’t have an event.

My kids don’t have any restrictions in terms of exercise, they’re being encouraged to participate in sports, being treated, and they’re doing great.

The other thing that’s really cool is I feel like I have a control study because I have twins, right? And one has Long QT and one doesn’t. I see zero difference between my girls in terms of one being on beta blockers, the other isn’t. And there’s no difference in terms of development or growth or energy. So that’s been really heartening for me as a mom to see that treatment and diagnosis isn’t impeding her in any way.