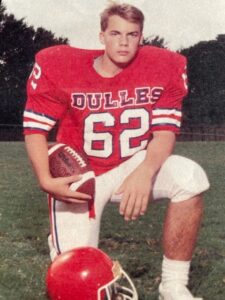 Can you tell me a little bit about your SADS journey – from diagnosis to where your family is today?

In 1991, I was a single dad living in Houston. I was a minister with a great church, a daughter at Baylor University, a 15-year-old son and his 13-year-old brother. My ex-wife, Glenda (who’s also very active with the SADS Foundation), was travelling in another part of the US at the time.

Andrew, my oldest son, was a football player. His team was very excited about the possibility of winning the Texas State Championship – that’s Friday Night Lights level, as big as high school football gets. All the kids on the team grew up together, and had played together since they were little kids. I knew them all really well – my house was the place everyone hung out.

The football team, including Andrew, asked if they could take classes during the summer so that they could have an extra period to practice for the championships during the school year. That summer, Andrew was coming home after his summer school class. I had a batch of nachos waiting for him, and after dinner we were planning to shop for back-to-school supplies. Then I got a call from a police officer. Andrew had been taken unconscious from a car, and they were getting ready to transport him to a small regional county hospital. I asked if they could take him to Memorial Southwest Hospital instead – where I taught.

I thought, from that conversation, that he’d been in a car accident. I walked into the ER and saw the two kids he’d been in the car with, and asked them what had happened. They said they’d been listening to the radio, playing air guitar, and Andrew was in the backseat. He suddenly stopped singing, and when they turned around, he was slumped over.

The kids exited towards our house and then noticed a policeman on the street writing a traffic ticket. The police knew all our kids, so they pulled up to him and asked him for help, and told him that their friend had passed out. Days later, I learned that two off-duty paramedics had also been on the street, where they immediately responded and pulled Andrew out of the car. Within a few minutes of the kids noticing that he was slumped over, the paramedics started working on him.

There’s a family room in the ER where they take families to tell them the news if the outcome isn’t projected to be good. I knew which room that was in Memorial Southwest Hospital, since I taught there. They took me to that room, but I thought it was just because the ER was jammed with about a hundred people – kids and parents waiting to hear about Andrew. Twenty minutes after taking him in, the cardiologist came in and told me that they were having trouble sustaining a heartbeat but were going to keep working. They worked on him for almost an hour, kept shocking him and giving him medicine. Around 2:00 in the afternoon, they told me that they couldn’t bring him back and that he’d passed away.

As many times as I’d helped other families deal with death, when it’s your own child, it’s completely different. You’re numb – you don’t know what to do. I had his two siblings with me and they were in shock. I made sure that the kids who were in the car with him knew that it wasn’t their fault. We left the hospital with no diagnosis or explanation.

After the memorial service, our contacts in the medical community recommended having a full screening for both of our other children. My daughter got a full cardiac screening soon after, and after they did tests, the doctor came out and said “I think we found it – I think we found what took Andrew.” He told me that he thought my family had Long QT Syndrome, and explained the peaks and valleys on the EKG from my daughter. The next day they tested my younger son, and his QT interval was even more pronounced. Mine was borderline, and the doctors started putting together the picture.

From a normal life five months before, we’d now had a full-blown death in our family, a new diagnosis, and a big change in our lifestyle. In the spring, we heard about the SADS Foundation, and the founder, Dr. Michael Vincent, asked if he could interview our family when he visited Texas that fall. My whole family was there, including my ex-wife, and we had a two-hour conversation. That conversation was really important to helping us deal with the emotional trauma of losing a child to cardiac death. Dr. Vincent had a kind and gentle spirit.

How did genetic testing and cascade screening play a part in your family’s story?

Dr. Vincent recommended having our first-degree relatives genetically tested with a blood test. There were a ton of people to contact, and this was in the early days of the internet. So the first thing I had to do was build a family tree of my cousins, track them all down, and mail them materials to give to their doctors because nobody really knew about LQTS at the time. I became the custodian of my family history.

They then contacted their children and second cousins – our family tree was spread all over the country. The earliest record of anything we could find in medical records was an Air Force flight physical I’d had in college in 1966 with a slightly flattened T wave, which wasn’t considered abnormal at the time.

What I always tell folks is, get to know the people at the SADS Foundation. Read everything that you can read about the condition – besides SADS, my go-to is the Mayo Clinic. Keep asking questions until you get the answers you need. You have to be the very best advocate you can for your own health.

Send your kid to school every year with materials about their condition. After he was diagnosed, my younger son had to be restricted from athletic activity; we were trying to build a structure around him so his condition wouldn’t scare the adults who interacted with him at school, and so they knew that if he said he felt strange or lightheaded, they shouldn’t just tell him to put his head on his desk and take deep breaths.