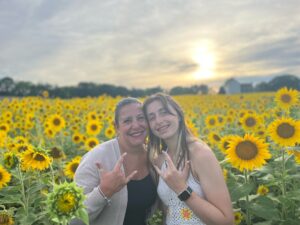 Stephanie and her daughter

I had passed out a few times as a teen. When I was 18, I had been home alone, sick all week. I went into school for the day that week and was walking up the stairs. I remember seeing dots and being told that I had  passed out. My father took me to the hospital to get checked. While I was in the hospital getting checked out, I went into Cardiac Arrest.

In 1992, only 2% of the people diagnosed with Long QT by Sudden Cardiac Arrest survived. I was very fortunate that I was in the hospital. I was in a coma for about three days. They told my family I was probably going to pass away and if I didn’t then to expect brain damage. I did not get a defibrillator implanted after my Sudden Cardiac Arrest because they thought that it was from a drug interaction. I didn’t get one until 2015 when my QTC had gone up to 620.

In 1992, Long QT was something that was not generally thought of for a diagnosis. It just so happened that a cardiologist on my case remembered reading something about Long QT. I was currently taking QT prolonging medications and they initially thought the diagnosis was from that. We did not know that it was genetics based until 1994. In August of 1994, my grandmother was ill, prescribed erythromycin, passed out and had a cardiac arrest and sadly passed away a few days later.

This led our family searching for more answers. Fortunately we were able to get family records and get involved in the University of Rochester study. We were able to get the genetics mapped out and discovered  a great grandmother had passed away from Long QT as well. We then had other family members tested and diagnosed.

I was monitored closely during my pregnancies. Each of my three daughters were tested shortly after birth. My youngest daughter did test positive and was started on medication. She’s now fifteen and seen annually by a pediatric electrophysiologist who we really like. One of the first things we did when we got her a cell phone was download the CredibleMeds app. She’s detectable on an EKG but has not had any issues at all, but with hormones being a potential trigger, we keep a close eye on her with medications

What advice would you give to someone who was newly diagnosed with Long QT?

Don’t go to Google, find an electrophysiologist if you are able to, not just a regular cardiologist – there is specific knowledge that comes with EPs. Be sure to download the CredibleMeds app, get in touch with SADS and if you have Facebook, watch and ask questions on the webinars that Dr. Ackerman hosts through SADS.

There’s so many connections you can make. You’re not alone and there’s others being diagnosed as well.

When I was first diagnosed I was told to stop everything. I was not allowed to compete in sports and now that has changed so much. I was eighteen and about to start college. It was a lot to be diagnosed, a new city, new school and it affected my mental health. There needs to be more talk about things especially with everything else going on in our world.

Grace is something I would want people to give themselves. Allow yourself to freak out and then pull it all back together.

How has the SADS Foundation been helpful to you and your family?

We didn’t know anything in 1992. The irony is that shortly before my grandmother passed, I had been starting to learn and know about the SADS Foundation, and just learning about the fact that it could be genetic.

I was 19 years old. I was just beginning to initiate conversations with my family with regards to whether it could be a genetic condition. SADS gave information at a time when there really wasn’t a lot.