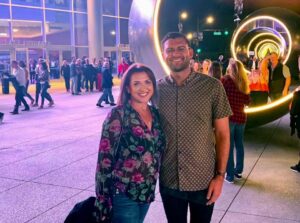 Renee and her son Jordan

Jordan was a happy, healthy, and beloved 26-year-old when he died suddenly from an undiagnosed SADS condition in November of 2019.

“I had never even heard of SADS conditions until we lost Jordan and read the acronym ‘SADS’ on the coroner’s report,” says his mother, Renee. “Jordan went to the same pediatricians for years and then transitioned to general practitioners in his teenage years. He had never had any significant health issues, but did start talking about ‘feeling a racing heart’ when he was in middle school. That was dismissed almost immediately by doctors as anxiety without proper testing.”

Jordan was known as a hard-working student and excelled in school. Although he continued to discuss his heart racing through college, he was never given a full cardiac evaluation – doctors insisted his symptoms were related to anxiety and academic pressure. He was given anti-anxiety medications as a result.

“After he passed, I got help accessing his medical records and saw that he had written these exact words to a remote doctor during an online discussion about how he was feeling: I am afraid I could die suddenly,’” says Renee. “It’s absolutely unthinkable to me that he wasn’t immediately sent to be tested. Instead, he was told to try yoga and meditate. I tried to reach that doctor and she refused to respond. I wanted to tell her what happened. I wanted her to know I said goodbye to my son on a coroner’s gurney.”

Through participating in SADS Live, running Facebook Fundraisers, and starting the SADS Prevention Program, Renee brings awareness to other families to help prevent tragedies in Jordan’s honor. “This blindsided all of us,” she says. “I immediately asked ‘Why have we all heard of SIDS but not SADS?’ I know Jordan would want us to amplify SADS conditions to help save other lives.”

Jordan passed away just before Thanksgiving in 2019, and a few weeks later Renee ran her first Facebook Fundraiser to amplify her son’s story and honor his memory after she learned Facebook was matching funds for the holidays.

“I was numb. I had no idea how I would get through the holidays and I was so worried for my daughter, knowing these conditions are hereditary. I got tested immediately and was negative, but knew I had to work to amplify these largely unknown conditions. The only way for me to survive was by finding purpose in the loss of my amazing son, and by helping to prevent this from happening to other families,” says Renee.

“When you lose a child so senselessly, all you can do is try to save other families in honor of your child.”

For first-time Facebook fundraisers, Renee suggests telling your story openly and honestly. “Anyone with a heart will understand that losing a child is the ultimate loss,” she says. “Use a lot of photos and videos showing your child living their life. Everyone who sees that will understand the gravity of the loss and think of their own children.”

Fundraisers are also a great way to raise awareness about these conditions. “Jordan was a golden-hearted, fantastic young man who was loved by everyone who knew him,” she says. “He told doctors his symptoms and no one did the work to help prevent his death. When you lose a child so senselessly, all you can do is try to save other families in honor of your child.”

Renee wants other families to know the warning signs of SADS conditions. “Reach out to me or to SADS if your child is feeling faint during exercise, or experiencing heart discomfort or chest pain, or if you have a history of sudden, unexplained death under 40 in your family. Every life we save is in honor of my son, who was working every day to make the world a better place. He was going to go on to change the world. He didn’t deserve this – none of our kids do. And I’ll keep fighting to raise awareness until cardiac testing is mandatory with symptoms like his, especially at college levels when our kids start directing their own healthcare.”

Renee still sees signs of Jordan everywhere – especially in owls. “Jordan was wise beyond his years, chose his words carefully, and cared about his family and friends above all else,” she says. “He had this light inside of him that everyone gravitated towards. After he passed, we’ve all seen owls everywhere. It’s a sign from him, and a comfort for us. He is with us every single day.”

Learn more about Jordan’s story here. If you believe you or your child might have a SADS condition, reach out to us here.