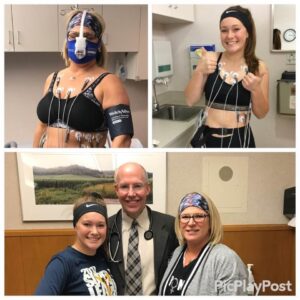 Dawn didn’t know she had Long QT Syndrome until her oldest child, Ella, was diagnosed while doctors were looking for a heart murmur.

“We were in shock,” says Dawn. “My husband is a professional soccer coach – we’re a very active family. We had no idea.”

Ella was monitored for nine months, and her QT interval continued to be borderline. The family moved to Minnesota. “I had a gut feeling that we needed to keep looking for answers,” says Dawn. They saw the chief cardiologist at the Mayo Clinic in Rochester, who redid Ella’s EKG – and passed the results on to Dr. Michael Ackerman, president of the SADS Board of Trustees.

Dr. Ackerman thought her QT interval looked suspicious, and ordered additional testing for their family. “My husband and I, plus our two children, went to the hospital and got tested,” says Dawn. “My QT was definitely prolonged, and both Will and Ella’s were borderline.” Genetic testing revealed that both Dawn and Ella have LQTS.

Ella was an active kid – and wanted to keep it that way. “Early on, Dr. Ackerman cleared me to start participating in sports again, as long as I didn’t do competitive swimming,” says Ella. “But when I was eight, swimming was cleared too and I started competing in triathlons.”

Ella currently plays soccer at Metropolitan State University of Denver, where she’s a goalkeeper. She’s studying special education, and works with the Down Syndrome Sports of America organization as a goalkeeping coach. Next year, she’s hoping to help at the Futsal World Cup for Down Syndrome in Brazil.

“I carry my AED everywhere,” says Ella. “I know my family is in great hands, on the right medications, and while it’s always in the back of my mind, it’s manageable.”

Dawn says that when she and Ella were first diagnosed, she was so scared that she couldn’t get out of bed. “I had to put my faith in the process, the science, and my doctors,” Dawn says. “We treat the AED like shin guards – it goes to every practice; and Ella was never alone when she was practicing. This diagnosis can be scary, but you want to live the biggest, best life possible.”

Ella wants those with a new diagnosis to know that there are lots of possibilities out there for those with LQTS. “Know what you’re comfortable with, and take it at your own speed,” she says. “The ceiling is higher than you think it is.”

Ella also wants to spread awareness about the lifesaving power of AEDs – and for more schools and athletic events to have AEDs accessible.  “My private middle school did not have AED accessibility until after I became enrolled,” she says. “I also have had to educate many coaches and adult supervisors on the condition as well as how to use the AED if an episode were to occur.”

Dawn emphasizes educating those around you about SADS – like teachers and coaches – but not letting it control your life. “This diagnosis doesn’t have to be the end,” she says.

“I think it is important for parents to lead by example if they are able. I did not want Ella to be afraid to do anything. She knew I was an active mom before our diagnosis and she was watching. She inspired me to stay active and lead a healthy lifestyle too.”